South Dakota became a state of the Federal Union on November 2nd 1889, possessing a hospitable people, cultured society, an excellent public school system with ample funds, fine buildings and good schools, churches of every denomination, a superior newspaper press, commercial facilities of a high order, railroad advantages equal to any, the conveniences of modern city life and the comforts of rural homes, situated within a short distance of markets, railroads and telegraphs, and every element and privilege of high civilization.

On April 30, 1803, the United States signed a treaty effecting the purchase of the Louisiana Territory from France. Over 800,000 square miles of land extending from the Mississippi River to the Rocky Mountains was purchased for about $15 million. On March 2, 1861, the Dakota Territory was created. At various times in its history the territory included parts of present Montana, Wyoming, Nebraska and both Dakotas. 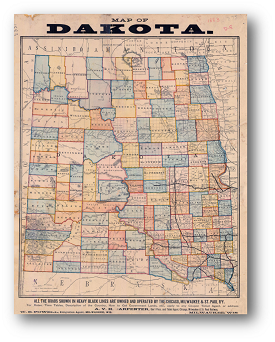 Beginning in 1877, efforts were made to bring Dakota into the Union as a single state, two states and even three states. One proposal called for a split down the middle making the states of Eastern Dakota and Western Dakota. Another proposal made the southern half into the state of Dakota and the northern half into the Pembina Territory. Yet another plan carved out the three states of North Dakota, South Dakota and the Black Hills. But the two proposals that received the most consideration were for the single state of Dakota or the creation of the two separate states of North Dakota and South Dakota.

The challenges faced in mapping historical county boundaries in the Dakotas arose largely from the vastness of the area. The surveying of public lands in the Dakotas began in the 1860s. Often the territorial legislature laid out counties prior to the land being surveyed, several times writing boundary descriptions that were most difficult to map. Over the years, South Dakota created and then eliminated a significant number of counties, more than any other state. South Dakota, with sixty-six counties, also created another thirty-nine counties that are now extinct.

Early settlers and others made written claims to the government for lands in the Territory. Land could be obtained through cash payment or after 1862 by homesteading. When a settler had completed the requirements for land entry, his case file was sent to the General Land Office in Washington, DC, where a patent (first-title deed) was issued. Those claims frequently included statements by relatives, heirs, neighbors, or friends describing the land, landowner and improvements. The local land offices then recorded transactions for each section of land in tract books.